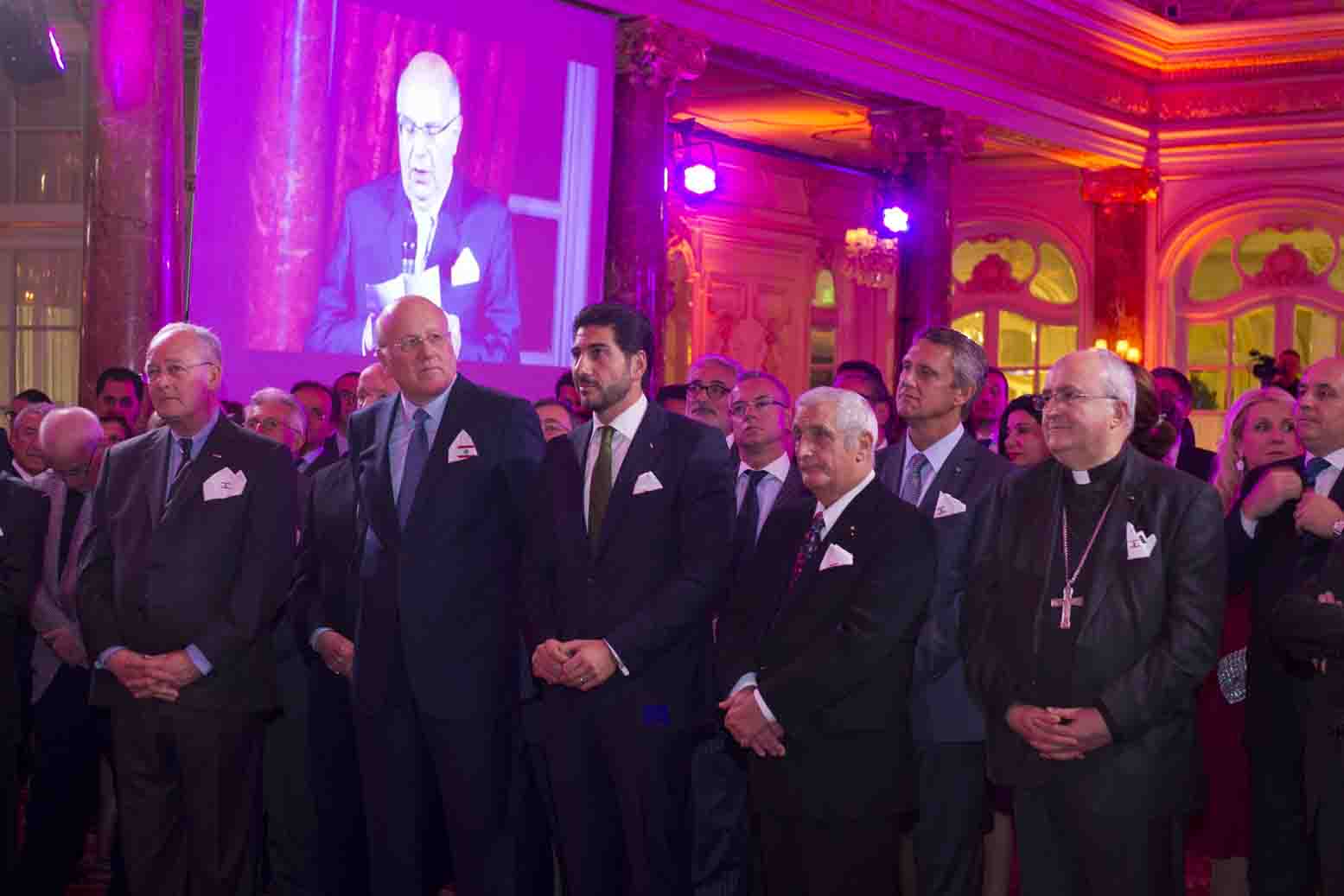 Posted at 19:09h in Interview by admin 0 Comments
0 Likes

The Principality of Monaco has established longstanding close ties with many states in the Mediterranean shores, particularly with Lebanon. Moustapha el-Solh, Honorary Consul of the Cedar country and president of the Association of Honorary Consuls of Monaco, was a valued guest at the 2014 edition of Art Monaco, and here shares with us his influence on the Principality, his role as a Consul, and his commitment to the artistic creation: a privileged gateway between two shores, between cultures.

You have been the Honorary Consul of Lebanon in Monaco since 1996 and you were elected president of the Association of Honorary Consuls in 2009. As an active and privileged observer, how do you see the evolution of the Principality’s influence, particularly at the cultural level, since the CMHA has integrated strategic council for attractive purposes?

Today, Monaco shines in more than one area and it will keep growing for many years to come. The reputation of the Principality in terms of finance, construction, medicine, education, sports, humanitarianism, environmentalism, recreational activities and safety is second to none. Many resources and assets are articulated by HSH Prince Albert II and launched in 2010, under the authority of the Minister of State, supported in this project by the CSA – the Strategic Council for attractiveness – of which the CMHA (the Association of Honorary Consuls of Monaco) is a member of Law and serves on two of its committees. But since your question specifically refers to the cultural aspect, I would say that Monaco, as a major international capital, acquired over time a foreground of cultural and artistic awareness, thanks to the municipality and the eclecticism of events offered throughout the year.

Raising the quality of programs, exhibitions and performances to a worthy level for the most renowned cultural and artistic areas, and to maintain them, has always been a major goal that continues to mobilize the highest political responsibilities of Monaco, and at their head the sovereign and his family. The important cultural and artistic platform that evolved into the Principality represents today an asset that contributes to the brilliance of Monaco. What better proof of this fact than the global reputation acquired by the Ballet of Monte-Carlo and the Princess Grace Dance Academy under the direction of Jean-Christophe Maillot? Let’s not forget the international impact of exceptional artistic and cultural events organized at the Grimaldi Forum: Princess Grace of Monaco, American Pop Art, Queens of Egypt, Treasury Romanov, Picasso… and certainly the contemporary and modern art show Art Monaco that today celebrates its five candles.

What is the role of an Honorary Consul?

I would like to recall that if the function of an Honorary Consul involves volunteering, it is nonetheless an important responsibility that is bestowed to those who assume the official representation of a country accredited by the Principality. The Honorary Consul is a person who, together with his representative office, conducts a professional activity that is equally busy. This dual role is certainly not evident, it requires a strong commitment and high availability, in addition to the necessary deployment of a substantial infrastructure in order to serve its fellow residents or travelers to Monaco, and constantly motivate the community that he has a great responsibility for. Let’s not forget that the core mission of any Honorary Consul is to work to serve the country that they represent and to consolidate its relations with the Principality as well as also with other states that are represented. Indeed, based on the Monegasque structures and economic and cultural organizations (CDE, CES, SBM, DTP, etc.), consuls can organize events locally or internationally to promote exchanges between countries and to reinforce ties with Monaco. Just a parenthesis to indicate that culture is now “the” sector consuls try to center their project exchanges almost as well as the economy. This is why the consular reunion, embodied by the CMHA, of which I have the great honor of chairing, plays an important role; it represents a melting pot of ideas and various projects set to benefit international relationships that would be effective and harmonious. It is also the place and ideal setting to conduct on a regular basis and in the best conditions, a reflection on the consular function, in order to boost and change its scope of action. If the Honorary Consular Corps is now very proud of the reputation of the CMHA in the life of the Principality as well as its advisory role in its strategic orientations, it is no less about the reputation firmly established at the highest international forums.

The Lebanese community of Monaco has more than 300 people. How do you explain the special relationship that has developed between your country and the Principality?

Indeed, more than 320 Lebanese currently reside in Monaco. They are very active and occupy positions of choice in the socio-economic life of the country. Beyond the happiness that represents the establishment of this beautiful land home to the geographical and climatic characteristics similar to those of the Cedar country, my fellow countrymen find here, at the heart of Monaco and close to the local administration, the necessary elements for a successful family and professional life. Furthermore, the particular and profound links that unite the two small states since ancient times, recognize, since the advent of Prince Albert II, a distinct rise, resulting in a growth of the resident Lebanese community and an important development of cooperation between Monaco and Lebanon. The official visit of the sovereign prince in Lebanon in 2011, the first of its kind, is concrete proof.

On the occasion of the 70th anniversary of Lebanon’s Independence, you have organized, under the High Patronage of HSH Prince Albert II and Ambassador of France, Mr. Hugues Moret, a photographic exhibition featuring the works of Lebanese contemporary photographers at the Oceanographic Museum. Can you tell us a little bit about your involvement in the arts, particularly in terms of sponsorship?

When the ambassador of France, my friend Hugues Moret, approached me after almost a year to offer me help to bring the 3rd edition of the Photomed Festival to Monaco, after visiting Sanary-sur-Mer for nearly a month in spring 2013, I immediately joined the project and wanted to provide the full support of the consulate. Photomed, which has given Lebanon an honor in this edition, offered in my eyes a unique opportunity of an encounter between three countries, three peoples, sharing the same sea, a common language, a common culture, that are very often similar. Moreover, by its theme, its timing, and its setting, this festival represented for me the dream to give my support to young Lebanese hopefuls in matters of photography and art, and at the same time to celebrate a triple friendship: a historical one between Lebanon, France and Monaco.

Moreover, the attachment that my wife and myself have to the museum and prestigious scientific events, that are regularly cultural and artistic, has led us to become loyal friends and convinced contributors, proud and pleased to lend our support to the cultural Monocan life.

Lebanon, the crossroad of civilization since ancient times, has always shone with its artistic and intellectual influence. How is the Lebanese creation holding on today and what is its current importance while the Middle East is experiencing a particularly newly troubled period?

Despite the dramatic events that currently cross the region, the artistic and cultural creation is fortunately doing well in Lebanon!

At the end of the fratricidal war that ravaged the country, the first project that the Lebanese worked on was the rehabilitation of the country’s infrastructure, which was almost completely destroyed. Then came the economic recovery. Today, although these two things have not been fully accomplished, a large part of the national effort is devoted to the cultural reconstruction of Lebanon. It should be noted however that such action has never experienced a period of hibernation, despite the very difficult times that may have inhabited the country. But today, more than ever, there is a tremendous intellectual vitality resulting in a cultural and artistic revival, which characterizes not only the Lebanese society, but also all walks of immigration, and they are many! The Lebanese people, whose pride of their cultural diversity goes far back in the history of our complex land of the East, are now convinced that diversity is their major asset, their main force in a globalized and open world.

You are also a member of the Oceanographic Museum’s board of the Association of Friends. Which of the artists and artworks have a profound effect on you to this day?

We have indeed for some time been members of Monaco’s Oceanographic Museum’s Board of Directors of the Association of Friends. This allows me to be even closer to the world of art and to discover new artists, since the direction of the museum is increasingly involved in artistic events of the highest level, as you know. It is especially the contemporary art that is in question at the museum, an artistic movement that I am especially a fan of. I am even more pleased that my wife Souad shares this passion with me. We like to assist in exhibitions, visit art shows, meet artists, known or less known, and encourage young talents, as was the case with Photomed in Monaco last November. Just like my diversity, my interest in contemporary art goes for artists of all backgrounds. In terms of sculpture, I love Botéro, César, Arman, Folon Manolo Valdés, Jeff Coons, Julian Opie and Tom Otterness. I am also keen on contemporary paintings, including Andy Warhol Marc Quinn, Damien Hirst, Takashi Murakami, and Hassan Jouni Hussein Madi.

But for me, the journey of learning in the domain of art is still very long, which goes just as well for my personal enjoyment!